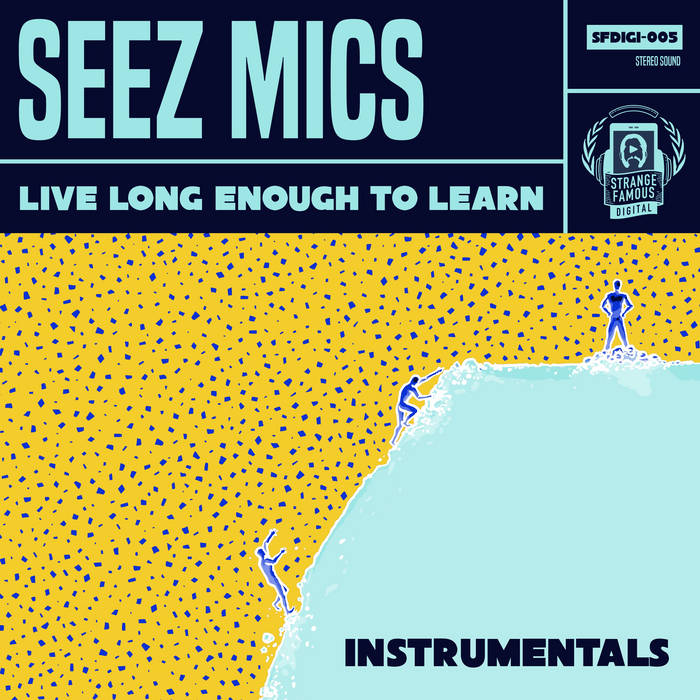 SEEZ MICS, the latest signee to Strange Famous Records’ digital imprint SFdigi, is a familiar name to followers of SFR. His history with the label goes back nearly 20 years (when he first hosted Sage Francis on his college radio show) and spans all the way to the most recent Epic Beard Men tour in early 2018, where Seez held down the opening slot on the group's mid-Atlantic dates.

A fixture in the long-overlooked DC/MD underground, Seez is regarded as one of the most underrated and well-respected lyricists and poets in the indie rap world. His body of work ranges from traditional hip hop (primarily from his long tenure as half of rap duo Educated Consumers) to progressive spoken word - and all facets of Seez's verbal dexterity are on display in his latest work, Live Long Enough To Learn.

Seez's former radio guest turned label boss Francis praises his approach on the mic: "There's a well-contained fire in his lyrics, a measured and tempered approach to his delivery of them, and a very matter-of-fact manner in which he wraps everything up. That's age and maturity at work, which isn't often rewarded in the music industry at large."

The respect and reputation earned by Seez during his decades around the industry is evidenced by the esteemed guests that appear on Live Long Enough To Learn: Sage turns in a verse on "The End Has Begun", and indie rap legend Slug (of Atmosphere) and Open Mike Eagle fill out the unorthodox posse cut "Figure 'Em Out." Production on the album includes beats from SFR labelmates Prolyphic and Aupheus, longtime collaborator Max Bent, and underground hip hop favorites Ecid, Ardamus, and The Doppelgangaz.

Seez doesn't shy away from his status as a tenured veteran of the music biz, taking a furious swing at the grown-man-rap sub-genre on LLETL: "While I'd like to think I'm the only artist ever brave enough to courageously explore myself in a mature and fearlessly introspective manner, I'm sure there's a painter or a proctologist or even another a rapper who has made a project with these guidelines. What can I say? I did my best, and comparison is the death of joy."

While he may opt for self-deprecation and humility in a business built on bravado and hubris, true heads (and the staff of the Strange Famous A&R department) are already wise to the razor-sharp skills and prodigious pen belonging to the emcee known as Seez Mics. Live Long Enough To Learn is the sum total of a rap life lived well, and is well worth a listen. And, you just might learn something before you're through.

(In other words: I was super depressed but then I worked really hard to get out of debt while developing a healthier relationship with myself and the people around me and so far I'm doing a great job, I mean sure it's not perfect and I still get bummed from time to time but who doesn't so yea just do your best I mean REALLY your best to fight through difficult times and maybe you'll end up doing a song with Sage Francis.)
- SEEZ

i don't need to be
the king of your hill, the queen of your pill
a thrill or just another lifer to kill
seez will chill while good and evil distill
the lessons we
Live Long Enough To Learn.

Thanks to my wife and daughter for being the heart of me.

Thanks to Sage Francis, Slug, Open Mike Eagle, DJ Addikt, DJ Idee, Barbara, and all of the producers for their contributions.

Special thanks to Max Bent and Storm Davis for all of the stats you don’t see in the box score.